A fine day albeit deteriorating weather

After a cold night at most levels the freezing level slowly rose to the tops of the higher summits. It felt colder today because of the fresh South-Easterly winds.Â Â Dry, sunny weather in the morning, skies quickly became overcast with strengthening South-Easterly winds in the afternoon. 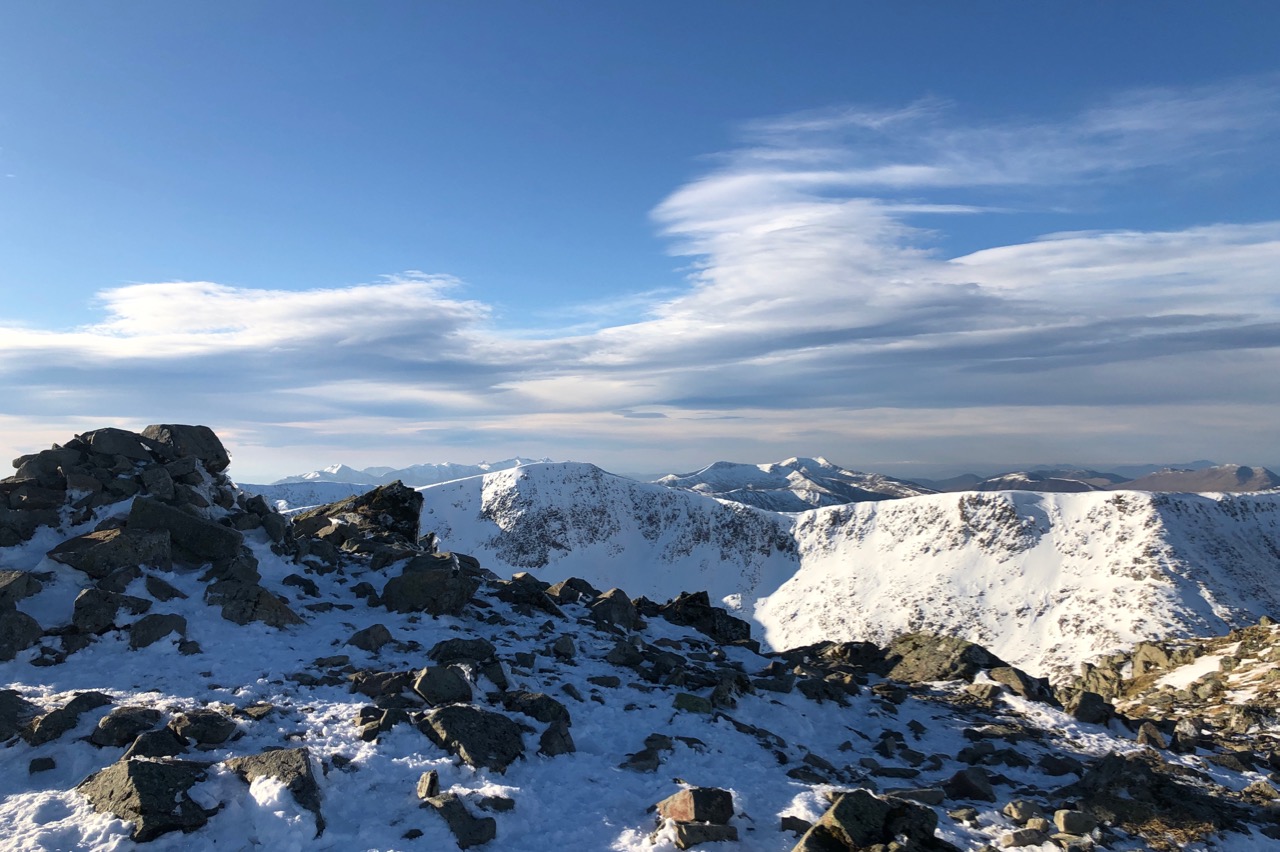 The summit cairn of Meall a’ Bhuiridh 1108 metres this morning, Sron na Creise in the background with views of Bidean and Stob Coire nan Lochan further beyond.Storm clouds staring to build! 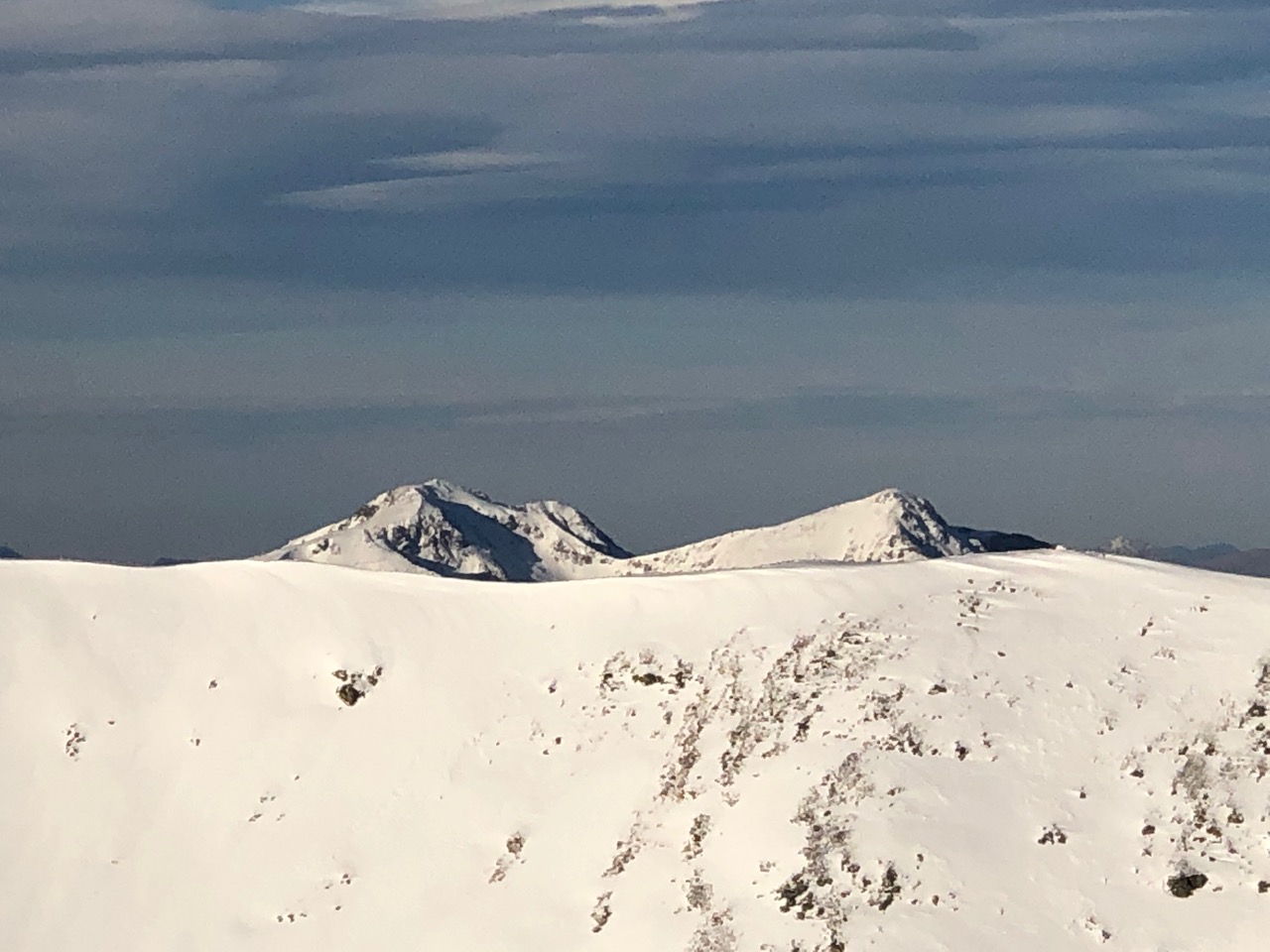 The snowy ridge line of Sron na Creise with Bidean and Stob Coire behind. 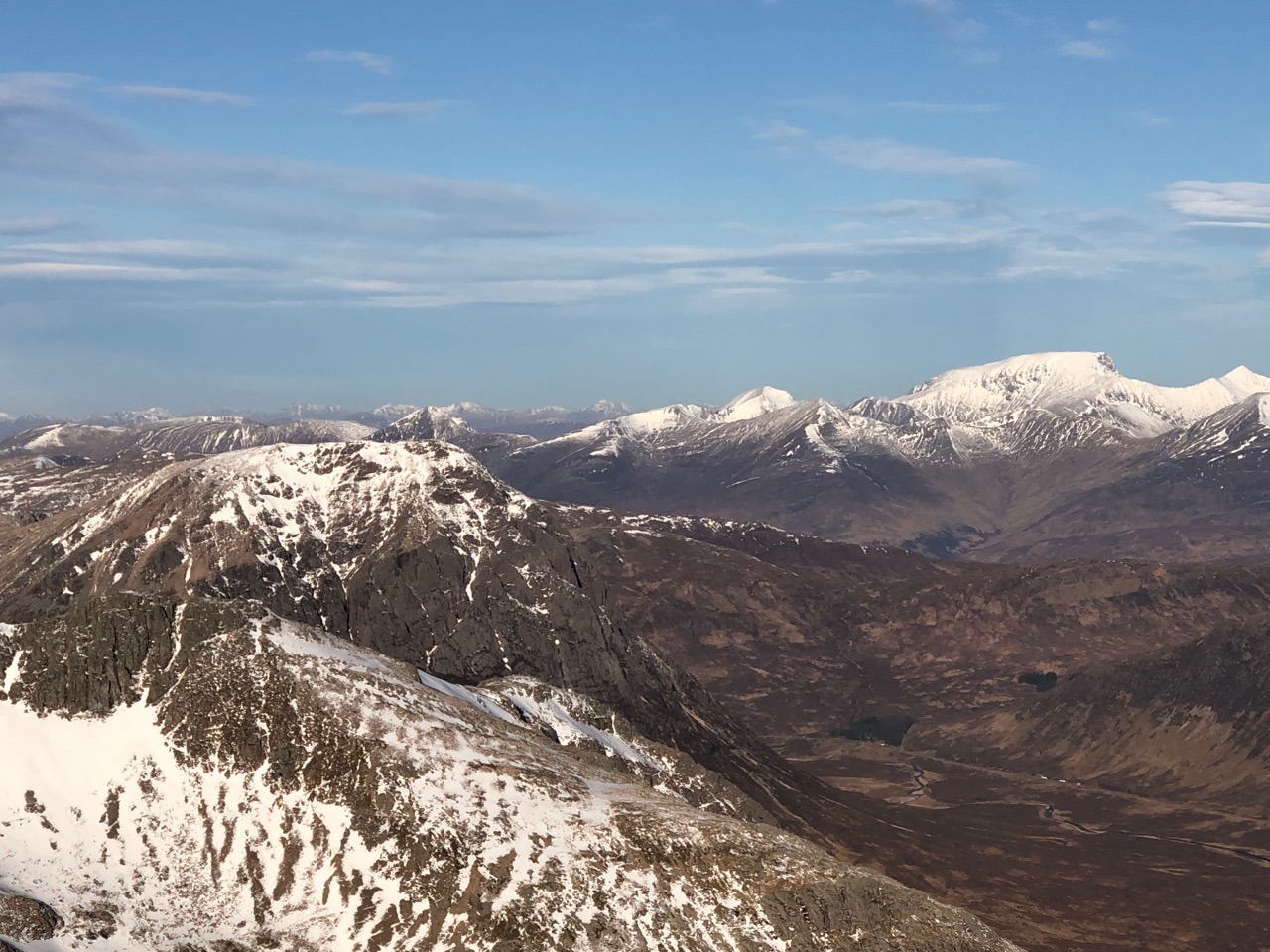 Buachaille Etive Mor on the left side Ben Nevis in the distant right. 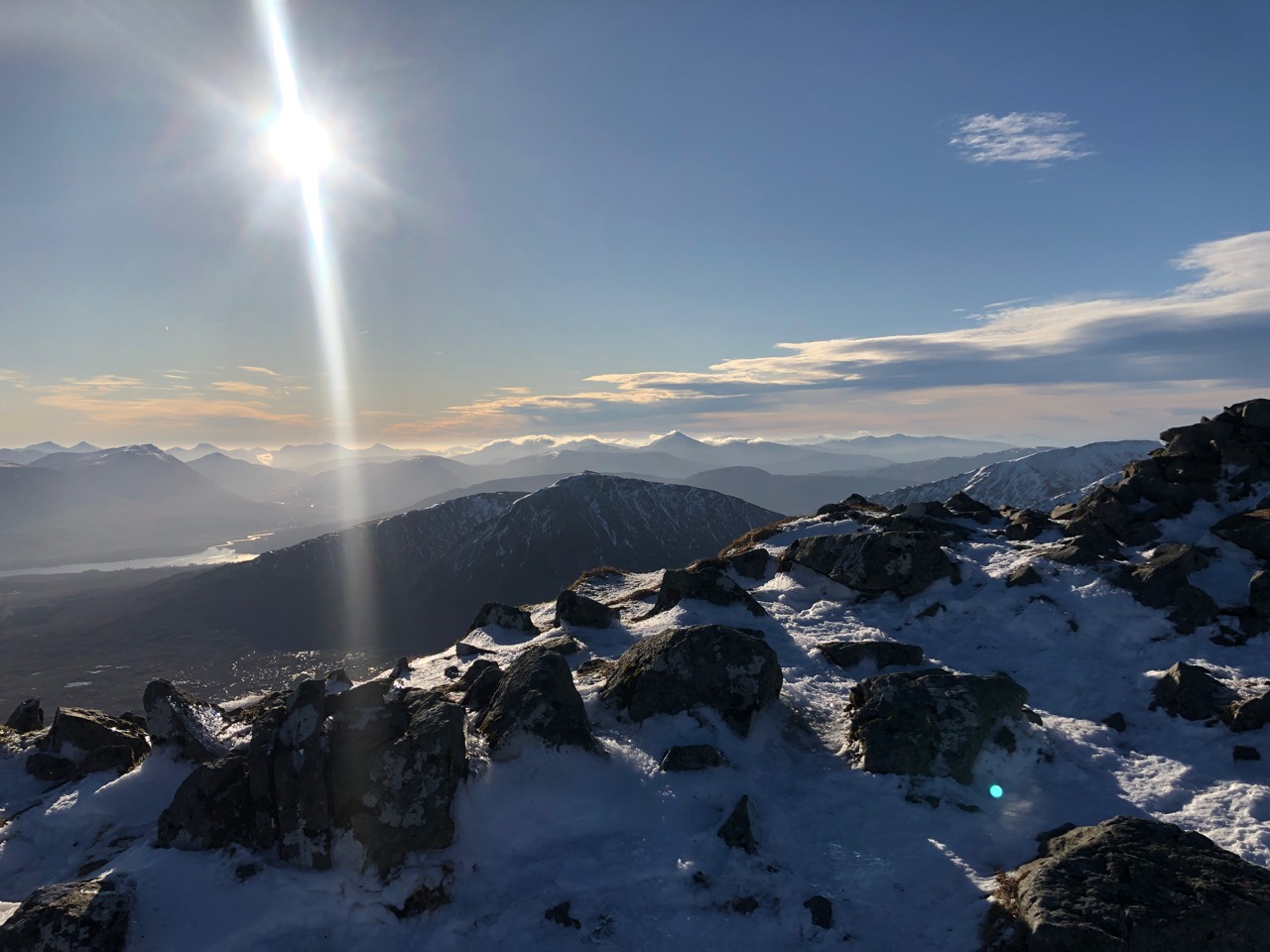 Looking South-Eastwards from Meall a’ Bhuiridh. Loch Tulla on the left. 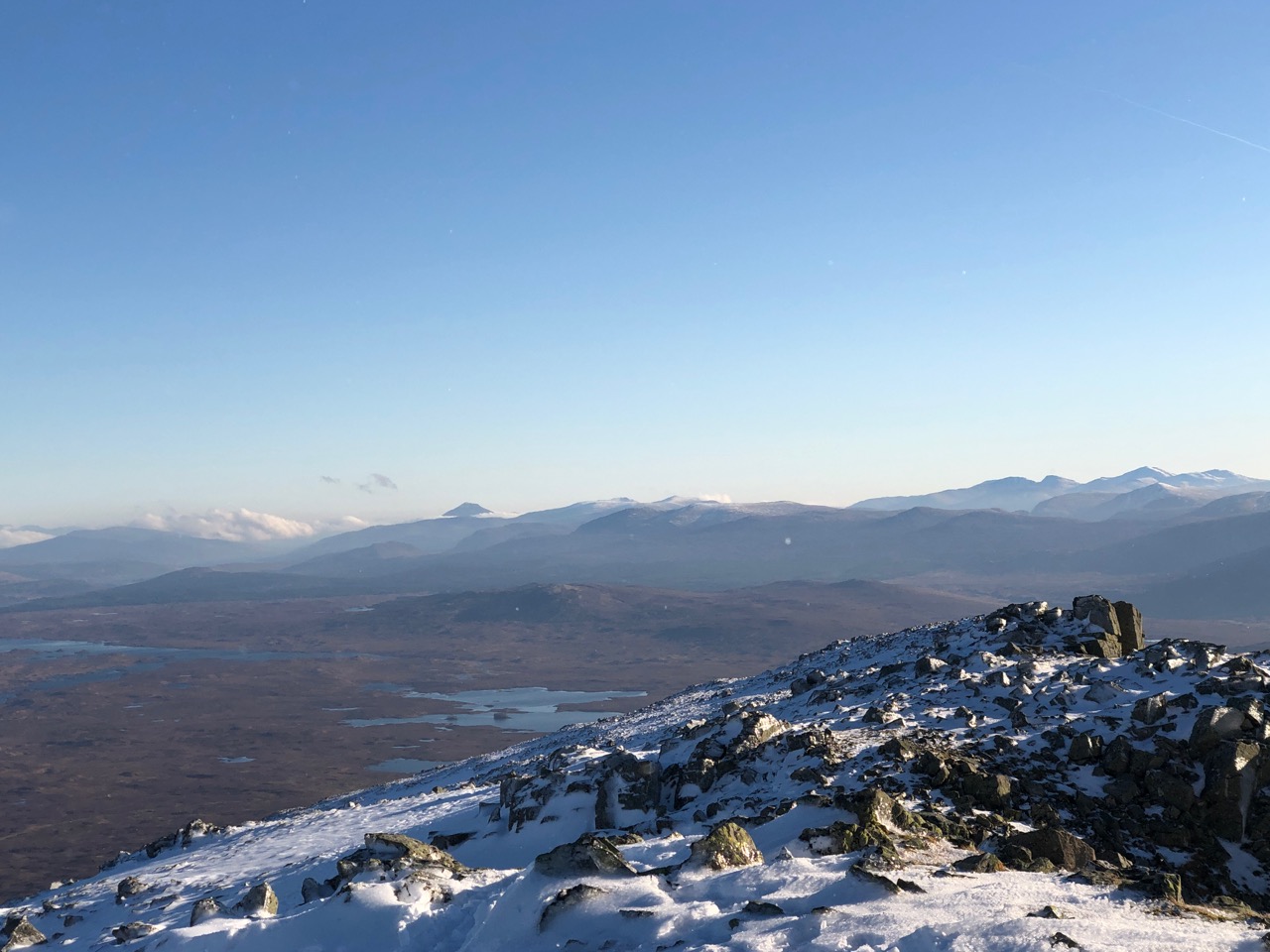 The Schiehallion experiment was an 18th-century experiment to determine the mean density of the Earth. Funded by a grant from the Royal Society, it was conducted in the summer of 1774 around the Scottish mountain of Schiehallion, Perthshire. The experiment involved measuring the tiny deflection of a pendulum due to the gravitational attraction of a nearby mountain. Schiehallion was considered the ideal location after a search for candidate mountains, thanks to its isolation and almost symmetrical shape. Schiehallion’s isolated position and symmetrical shape lent well to the experiment

The experiment had previously been considered, but rejected, by Isaac Newton as a practical demonstration of his theory of gravitation. However, a team of scientists, notably Nevil Maskelyne, the Astronomer Royal, was convinced that the effect would be detectable and undertook to conduct the experiment. The deflection angle depended on the relative densities and volumes of the Earth and the mountain: if the density and volume of Schiehallion could be ascertained, then so could the density of the Earth. Once this was known, it would in turn yield approximate values for those of the other planets, their moons, and the Sun, previously known only in terms of their relative ratios. As an additional benefit, the concept of contour lines, devised to simplify the process of surveying the mountain, later became a standard technique in cartography. 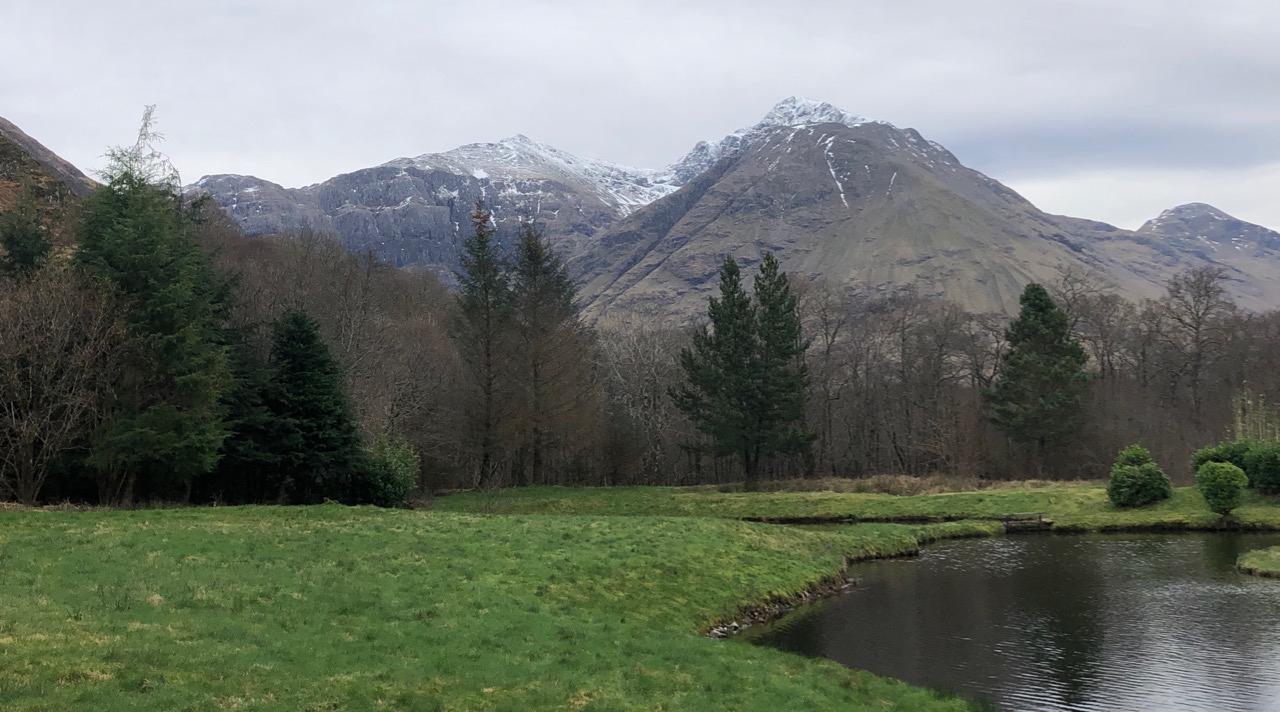 Bidean nam Bian, lying to the south of Glen Coe, Highland, Scotland, is the highest point in the former county of Argyll. It is a complex mountain, with many ridges and subsidiary peaks, one of which, Stob Coire Sgreamhach, is classified as a separate Munro.

The most noticeable features of Bidean nam Bian are the famous Three Sisters of Glen Coe, three steeply-sided ridges that extend north into the Glen. Two of the sisters, Gearr Aonach (Short Ridge) and Aonach Dubh (Black Ridge) converge at Stob Coire nan Lochan, a 1,115Â m (3,658 feet) subsidiary peak of Bidean nam Bian that lies about 1Â km to the northeast of the actual summit. The final, most easterly sister, Beinn Fhada (Long Hill), joins the Bidean nam Bian massif at the summit of Stob Coire Sgreamhach.

Beinn Fhada is separated from Gearr Aonach by a glen known as Coire Gabhail. This can translate to Glen of Capture, however the glen is more normally known as the Hidden or Lost Valley, as it has a wide flat area concealed from Glen Coe by the landslip which blocked the entrance and allowed a loch to form. The valley was used by Clan Macdonald to hide their livestock from raiders, or hide cattle they themselves had stolen. The steep rough path up from Glen Coe skirts a wooded ravine, and is a popular short walk (around 4 kilometres (2.5Â mi) in total), though it involves a river crossing and some rocky sections.[4]